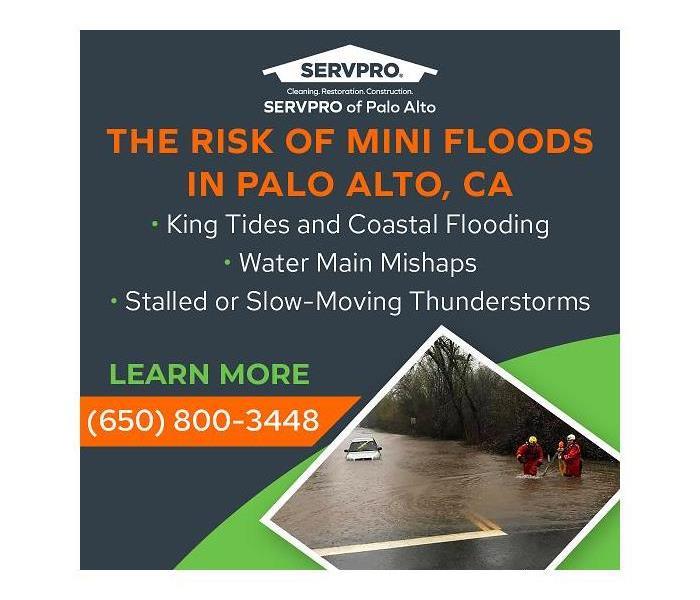 The water and flood damage restoration professionals at SERVPRO of Palo Alto are proud to serve the Palo Alto community, as well as surrounding areas. Palo Alto is described as: “a dynamic global city…named after a majestic 1,000-year-old coastal redwood tree along San Francisquito Creek, where early Spanish explorers once camped… Palo Alto is recognized as a global leader in cutting-edge technological development and is known as the ‘Birthplace of Silicon Valley.’ This exciting mix of tradition and innovation makes Palo Alto an extraordinary destination for visitors.”

This beautiful area is a magnet for new residents and tourists. The burgeoning population stresses the public works infrastructure. In 1998, a sudden, heavy downpour caused a devastating flood that did almost $30 million in storm damage. San Francisquito Creek overflowed its banks by more than 11,000 acres. An estimated 1,100 homes suffered flood damage. Nearly 500 people were forced to evacuate inundated areas. This flooding occurred in an area (Palo Alto, Atherton, Redwood City) that receives 17 inches of rain per year, a little more than one-half the long-term national average of 30 inches. The Bay area also boasts around 261 days of sunshine annually. With so much sun and so little rain, it is easy to be lulled into complacency with regard to the risk of a sudden mini flood.

The Risk of Mini Floods Are Real in Palo Alto, CA

Despite all the sunshine, the Bay area, including Palo Alto, Atherton, and Redwood City, is still subject to flood risk from King Tides, infrastructure mishaps and malfunctions, and stalled or slow-moving thunderstorms.

Residents and tourists flocking to the beach and coastal areas need to be aware of King Tides, which can cause mini flooding in low areas along the coast in the Bay area. The National Oceanic and Atmospheric Administration, in an article entitled, “Coastal Flooding in California,” describes the risk: “Californians living on the coast may be used to seeing so-called ‘King Tides,’ a regular phenomenon where high tides are higher than normal on certain days of the year.” These unusually high tides have overwhelmed storm drainage systems, caused road closures, damaged the transportation infrastructure, and led to serious erosion.

Sometimes the direct cause of a mini flood may not be weather-related. Instead, the source of the flooding may be a water main. The water line may have been damaged by excavating equipment conducting road construction. Unexplained catastrophic failure, seismic activity, improper installation, or aging may account for the waterline breakage. Tens of thousands of gallons of water can flood basements, crawl spaces, and the living areas of slab homes.

A stalled or slow-moving thunderstorm can dump several inches of rain over a small area such as a subdivision or cul de sac. Flash flooding may result. Gutters may be overwhelmed, resulting in flooded attics. Storm drains may not be able to disperse the water, and the backup may flood low-lying homes. The landmass under the stalled thunderstorm may receive several inches of rain in an hour or so. This amount of intense rainfall may also spawn landslides.

Be Prepared for the Unexpected

A semi-arid region such as the Bay area is not without the risk of flooding and water damage. Preparation can save property and lives. Below are tips to help homeowners stay on top of the situation.

The survival kit should include the basics: flashlights, water, food, first-aid, toiletries, evacuation routes, contact information, two weather radios, etc. The kit will come in handy in the event of an earthquake or wildfire.

Is the area in a flood plain? If not, have stalled or slow-moving storm cells caused localized flooding and property damage in the recent past? Neighbors and local city officials are a good source of information regarding flooding, landslides, and wildfires.

In the event of a disaster, one phone call delivers results. In about an hour, a team of certified, experienced, and well-equipped technicians arrive on the scene to inspect and assess the situation and begin the cleanup and restoration. The customer is provided with a detailed, well-documented estimate. The SERVPRO staff can handle the insurance claims process from beginning to end. The homeowner can focus on recovering and returning to life as normal.

For more information about storm damage restoration in Palo Alto, CA, and the surrounding area, email SERVPRO of Palo Alto at office@SERVPROpaloalto.com. The office can also be reached by phone at (650) 800-3448.