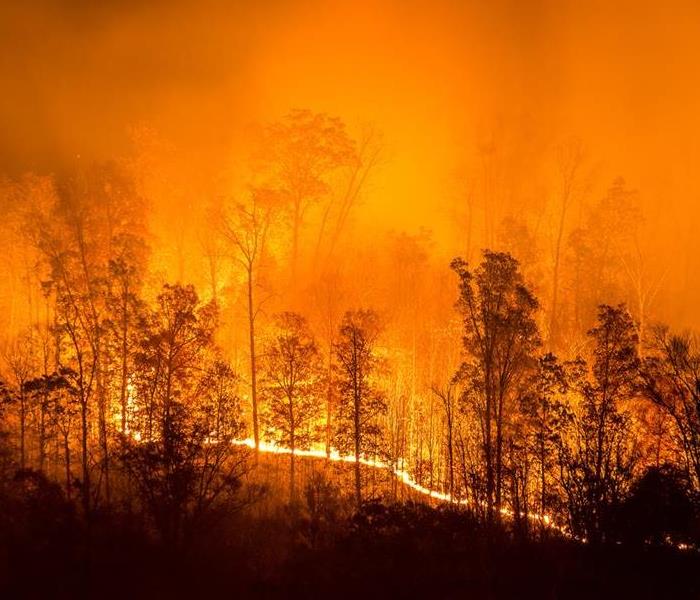 SERVPRO of Palo Alto, one of Northern California’s top damage restoration companies (taking care of fire damage, water damage, mold mitigation, smoke and soot damage, and post-damage clean-up) is ready to assist those Californians affected by the recent fires in Northern California, including those residents and business owners affected by the following fires: the Carr Fire, the Mendocino Complex Fire, and Lake County Fire. Due to extreme heat and dry weather conditions, Northern California, once again, has been hit hard by wildfires and firestorms this summer. The Mendocino Complex Fire, in particular, is now California’s largest wildfire in history. Firefighters continue to labor for many hours to fight fire, with only partial containment. These fires are not only causing damage and loss to nature, but also causing damage and loss to business and residences. The sheer size of these Northern California firestorms has caused significant damage to property, as well as several casualties.

SERVPRO of Palo Alto restoration company, with its large number of resources, staff, and proprietary equipment, can help restore property that has been affected by wildfires. Its expert technicians, with their multiple training certifications, can handle any size job, whether large or small. SERVPRO of Palo Alto has been in business for almost five years, and in that five years, has garnered numerous five-star reviews and contracts with large companies and organizations. They are trusted to do the job right. SERVPRO of Palo Alto serves and has worked in the following cities in Santa Clara County, California: Palo Alto, East Palo Alto, Stanford, Atherton, Menlo Park, Redwood City, and North Fair Oaks.

The Carr Fire was a massive wildfire that burned in Shasta and Trinity Counties in California, United States. The fire burned 229,651 acres before it was 100% contained on August 30. The Carr Fire destroyed at least 1,604 structures (at least 1,077 were homes) while damaging 277 others, becoming the sixth-most destructive fire in California history, as well as the seventh-largest wildfire recorded in modern California history. The Carr Fire cost over $1.658 billion in damages, including $1.5 billion in insured losses and more than $158 million in suppression costs.

The Mendocino Complex Fire, which began at the end of July is still not 100% contained (as of September 2, 2018). It is a large complex of two wildfires, the River Fire and Ranch Fire, and was burning in Mendocino, Lake, Colusa and Glenn Counties in California. The Ranch Fire is currently burning eight miles northeast of Ukiah and the River Fire is currently burning six miles north of Hopland.

First reported on July 27, 2018, both fires have burned a combined total of 459,123 acres and are collectively 97% contained (as of September 2, 2018), while the Ranch Fire has burned 410,203 acres, surpassing the Thomas Fire to become the single-largest modern California wildfire. The fires collectively destroyed 280 structures while damaging 37 others; property damage has not yet been calculated for the fire complex, but costs are presumed to be staggering. The Mendocino Complex also cost over $176.4 million in fire suppression costs. The city of Lakeport, communities of Kelseyville, Lucerne, Upper Lake, Nice, Saratoga Springs, Witter Springs, Potter Valley, and Finley, parts of Hopland, and the tribal communities of Hopland Rancheria and Big Valley Rancheria were evacuated.

Lake County has experienced two separate wildfires: the Carder Fire, which burned 50 acres and was contained late July, and the currently burning (as of September 2, 2018) Kelsey fire, which as burned 36 acres so far and has prompting evacuation advisories.

Northern California’s firestorm season has been very intense this year, both in scope and length. As a result, homeowners and business owners have suffered tremendous losses when it comes to property. To help mitigate fire damage as a result of the Lake County Fire, Mendocino Complex Fire, and Carr Fire, SERVPRO of Palo Alto has assembled a firestorm team to quickly restore property to its original condition. They will also work with your property insurance company to ensure coverage and give you peace of mind as quickly as possible.

If you are in any of the areas affected by these Northern California wildfire, or if you experience fire damage in the following areas: Palo Alto, East Palo Alto, Stanford, Atherton, Menlo Park, Redwood City, or North Fair Oaks, please call SERVPRO of Palo Alto at (650) 800-3448. We’re here to help! We will make it “Like it never even happened.”