What Are the Flood Risks in California, and How Can Homeowners Prepare for Flood Damage? 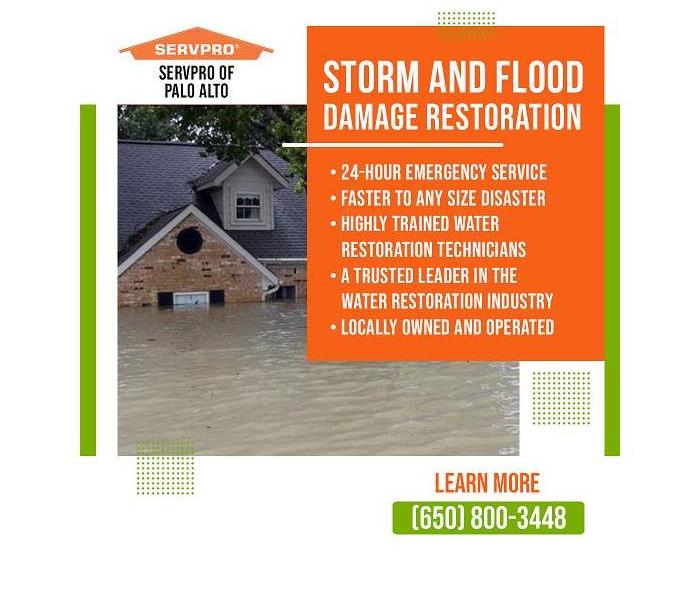 Blog Summary: SERVPRO of Palo Alto explains the many flood risks in California and the importance of identifying a reliable storm and flood damage restoration company to rapidly provide services should flooding occur.

The storm damage restoration professionals at SERVPRO of Palo Alto live in the community. They know the people, the community, and the climate. Palo Alto is no stranger to natural disturbances. In 2020, due to its proximity to the San Andreas Fault, the town registered approximately four hundred earthquakes of varying magnitudes. The area also sees its share of local flooding events from heavy rains, stormwater runoff, and rising tides.

To cope with flooding issues, the city is moving ahead with flood mitigation strategies and a new sea-level adaptation plan. Homeowners and businesses can take a page from the community’s flood mitigation playbook and prepare for the future by getting to know the property damage restoration professionals at SERVPRO of Palo Alto today before disaster strikes tomorrow or in the future.

California is a magnet for growth. Job opportunities are available across many sectors. The climate is comfortable all year round, and the state features many hiking, biking, camping, canoeing, and kayaking opportunities. Metro green spaces dot the cities. The Palo Alto area features restaurants and entertainment that are second to none. The multi-ethnic population offers an exciting array of cultural experiences and cuisine.

However, in spite of the many amenities, including the temperate climate, abundant sunshine, magnificent beaches, and beautiful mountains and valleys, California is prone to severe flooding. According to the Public Policy Institute of California, “Most of California is vulnerable to floods. Every county has been declared a flood disaster area multiple times. One in five Californians and more than $580 billion worth of structures (including contents) are vulnerable. Transportation, energy, water supply, and sewer networks are also at risk of disruption. The state’s many valleys—particularly the Central Valley—are susceptible to rivers overflowing. Lowland coastal flooding is common when high tides coincide with large, storm-driven waves; tsunamis also strike occasionally. Southern California, the deserts, and areas recently burned by wildfires are susceptible to flash floods. Storms commonly cause local urban flooding because inadequate drainage systems and impermeable surfaces—such as streets and parking lots—allow stormwater to pond quickly and deeply.”

Even though flood risks are increasing in California, funding for flood management and mitigation is not keeping pace with the elevated risk. People and property values in California’s flood-prone areas are growing. This tandem growth heightens the economic vulnerability and threatens public safety.

Needed upgrades to flood management infrastructures — such as dams and levees — approach $34 billion. Accomplishing these upgrades within twenty-five years would mean spending $1.4 billion per year, which is nearly twice the current level of expenditures. Other novel options still fall short of the needed infrastructure expenses.

On another front, climate change calls for innovative approaches to address future challenges arising from the accelerated impact of changing weather patterns. Experts from the Public Policy Institute of California explain the challenges facing Californians, writing, “Many of California’s flood management systems were designed for the hydrological conditions of the previous century. California’s climate is changing with larger winter storms, more precipitation falling as rain rather than snow, and more extreme high tides. These changes, along with rising sea level, will make many current flood management systems obsolete within decades, requiring major investments in new infrastructure and new approaches to reducing flood risk.”

Helping those hurt by flooding

The National Flood Insurance Program (NFIP) offers federal flood insurance to homes and businesses in flood-prone areas. However, the program is deep in debt, and its future is tenuous. California must proactively develop new strategies regarding the development of floodplains and create a state-run flood insurance program in order to lower economic risk to residents and businesses.

Past strategies routed floodwaters to the sea through thousands of miles of man-made river channels. These efforts separate communities from their rivers, adversely impact the environment, and may even increase the risk of flooding.

In the meantime, flooding is a problem for many California residents, including those in Redwood City and the surrounding area. Until infrastructure programs are implemented to decrease the intensity of flooding and redirect the water from urban centers and flood plains, homeowners and businesses will need to take precautions, obtain flood insurance, and have readiness plans in place to deal with storm and flood damage disasters.

In case of a property damage disaster such as storm damage or a flood in a residential or commercial setting, SERVPRO of Palo Alto is available 24 hours a day, 365 days a year to help regain control of the situation quickly and begin the restoration process. Quick response and rapid remediation return life and storm or flood-damaged areas back to their pre-disaster condition. A rapid response not only means less disruption, but it also lowers the potential for advanced secondary water damage and the likelihood of mold infestation. SERVPRO offers emergency tarping, security fencing, and board-ups. When damage is severe, the team of professionals can also do pack-ups and provide storage until the site is ready to receive the items.

Sometimes only a few minutes separate calm from chaos in a property damage disaster. The time to prepare is well in advance of severe weather, flooding, earthquakes, or wildfires. Contact the SERVPRO professionals today and begin a relationship that will last long into the future. For more information about flood damage restoration in Redwood City, CA, and the surrounding area, contact the SERVPRO of Palo Alto office by phone at (650) 800-3448 or email office@SERVPROpaloalto.com.