How Property Owners Can Stay Safe When an Earthquake Causes Fire Damage in Redwood City, CA 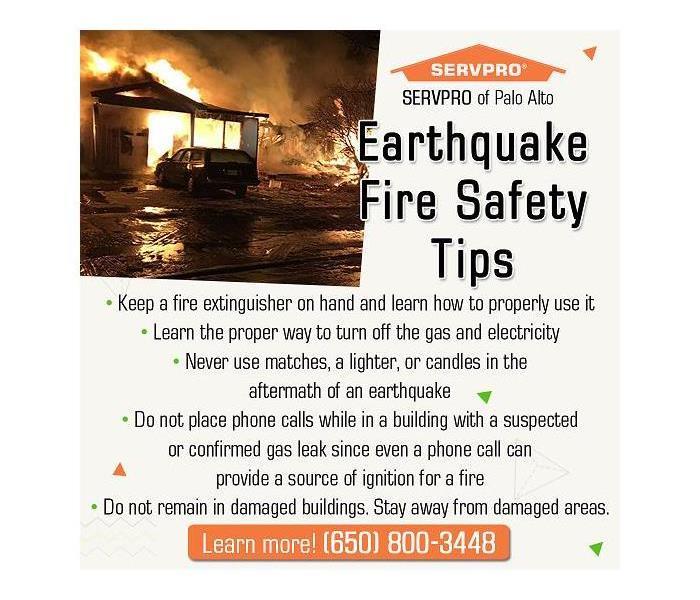 Blog Summary: Earthquakes are powerful seismic events that also have the potential to cause fire damage. SERVPRO of Palo Alto is committed to helping local property owners recover when fire damages their homes or businesses in the aftermath of an earthquake.

A major earthquake is a devastating event that can cause not only structural damage but also fire damage and water damage. Home and business owners in Palo Alto and surrounding areas such as Redwood City, Atherton, and Sunnyvale understand that earthquakes are a common concern for the area. In fact, the state of California experiences over 100 earthquakes per day. SERVPRO of Palo Alto is sharing fire safety tips to help homeowners stay safe in the aftermath of fire damage caused by earthquakes.

How Does an Earthquake Cause Fire Damage?

The Pacific Northwest Seismic Network notes that fire damage “has long been recognized as a major hazard following earthquakes. Before the 20th Century, earthquakes would often upset burning candles, lamps, stoves and fireplaces (with dangerous fuels common). Today in the US, ruptured gas lines and arcing electrical wires are the most common sources of ignition. In addition to providing chances for ignition, earthquakes can block access to fire fighting equipment and damage fire-fighting water supplies, making fighting the blazes, of which there might be many across a city, especially challenging.”

A relatively recent earthquake that resulted in widespread fire damage was the 1994 Northridge earthquake that affected the Greater Los Angeles Area. According to the California Fire Prevention Organization, “Within minutes of the Northridge earthquake, LA City firefighters were en route to multiple fires in the San Fernando building. In the period from 4:31 AM through midnight, there were approximately 110 earthquake-related fires.”

How to Safely Remediate Fire Damage Caused by Earthquakes

As a locally owned and operated damage restoration company, SERVPRO of Palo Alto has experience in safely dealing with fire damage that results from seismic events common to the local area. Highly trained technicians use state-of-the-art equipment and resources to remediate the damage. In contrast to smaller restoration companies that are not part of a franchise, SERVPRO of Palo Alto is able to deliver a highly scalable response to complete large or small jobs for both residential and commercial clients.

Fire damage is often accompanied by secondary damage, including smoke damage, water damage, and mold damage. SERVPRO of Palo Alto has competencies in a variety of different restoration specialties, so the crew can tackle complex remediation situations.

One way to minimize the scope of secondary damage is to trust the restoration project to a company that can act quickly and arrive on the scene promptly. A rapid response limits primary and secondary damage and prevents additional damage, which lowers restoration costs.

What Is the SERVPRO Fire Damage Restoration Process?

While each fire damage incident is unique, the general remediation process, by and large, remains the same. The typical timeline for a damage restoration project is outlined below:

The team at SERVPRO of Palo Alto is committed to always treating clients, their homes, and their belongings with the utmost respect, care, and empathy. To learn more about fire damage restoration in Redwood City, CA, contact SERVPRO of Palo Alto by email at office@SERVPROpaloalto.com or call the office at (650) 800-3448